Ian Rennie’s story “Angels at the Border” was published in Metaphorosis on Friday, 14 April 2017. Fiction surrounding the technological singularity has always bothered me, even leaving aside the questions that scientists and futurists raise about whether it will actually happen at all. We have this idea that when some form of global digital consciousness happens it will happen everywhere, for everyone. This misses two fundamental things about humanity. The first is that not everyone …

The angels moved up the road towards Gethsemene in a triad formation. If they’d walked, that would have been something. If they’d flown, swooped in from the sky, that would have been something else. But they didn’t. They just moved, floating slowly along the road in unison. Behind them — almost too far away to see — was the unnatural mountain of their home, fading into the skyline. Valeria had gate duty that day. It …

A: Honestly it would be a relief if they were.  It might mean that I couldn’t take credit for any of my good ideas, but it would also mean I couldn’t take all of the blame for my bad ones.  I’ve always liked the Terry Pratchett idea of idea particles whizzing through space looking for receptors in people’s brains, meaning we’re surrounded by creativity all the time.  In truth, though, a great idea is only half the battle.  The best idea in the world is nothing more than an idea unless you do something with it.

Ian Rennie’s story “Angels at the Border” was published in Metaphorosis on Friday, 14 April 2017. Subscribe to our e-mail updates so you’ll know when new stories go live.

Ian Rennie is a librarian and writer in Cambridge, England.  As well as writing, he is one of the Cambridge organizers of National Novel Writing Month.  He was once retweeted by Neil Gaiman, not that he’s bragging or anything.

Ian Rennie’s story “Angels at the Border” was published in Metaphorosis on Friday, 14 April 2017. Subscribe to our e-mail updates so you’ll know when new stories go live. 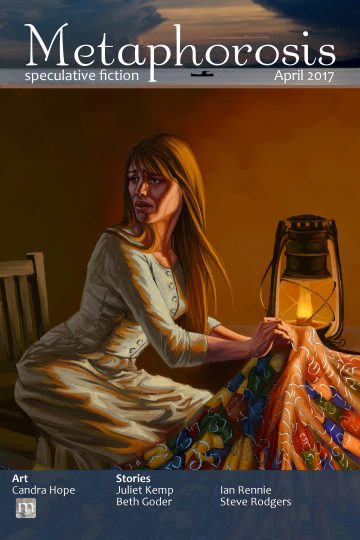