A: The Aboriginal Australians have several theories on the origin of this noble monotreme. Generally, these involve a duck mating with a water-rat. This is true enough, but it leaves out that these creatures were biologically compatible only because the duck in question was from a universe where birds are mammals. The crossover event is believed to have coincided with the formation of the Chicxulub crater. It is unknown what else, if anything, crossed alongside.

J. Tynan Burke’s story “The Unlucky Few Who Must Not Cast”
in Metaphorosis Friday, 19 November 2021.
Subscribe now for e-mail updates!

J. Tynan Burke is a software engineer and writer. He lives in New York City with his husband and their enormous cat, Samwise. When he isn’t typing, he plays tabletop RPGs and streams murder mysteries. His dream is to one day be an old man futzing around in the garden. You can find his stories in Metaphorosis, Swords and Sorcery Magazine, and various anthologies.

J. Tynan Burke’s story “The Unlucky Few Who Must Not Cast”
in Metaphorosis Friday, 19 November 2021.
Subscribe now for e-mail updates! 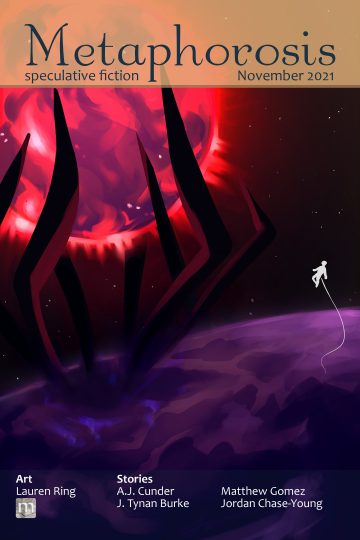 All the stories from the month, plus author biographies, interviews, and story origins.

J. Tynan Burke’s story “The Bagel Shop Owner’s Nephew” was published in Metaphorosis on Friday, 3 August 2018. Late last year, an acquaintance recommended the documentary ‘Obit,’ about the obituary department at the New York Times. I was struck by the frazzled archivist who runs the clippings morgue. At the same time, I was flipping through Borges’s ‘Book of Imaginary Beings,’ and found an entry on the Tzadikim Nistarim (which Borges called ‘Lamed Wufniks’). So …

Last night, Murray called with another bunch of prophecies, so Yonatan Kaplan hasn’t slept yet. He stayed up preparing dossiers on some doomed socialites instead. Now it’s a little after dawn, Friday morning, and he’s standing in line outside Fox’s Bagels with a thermos and a tote bag. He’s shaky from too much caffeine and too little sleep, but he doesn’t regret it. The socialites will die this weekend, according to Murray, and Murray’s got …