K. G. Anderson’s story “Rowboat” was published in Metaphorosis on Friday, 12 February 2016. I’ve often wanted to rewrite parts of my own life story, so it was natural that I’d write fiction about a character who attempts it. Fiction is filled with characters who reinvent themselves. This used to be true in real life, as well — people who emerged from war zones, or who turned up on the frontier, where no one could …

In terms of flavor, it helps if you think of the tael as a giant blueberry. Yes, imagine a blueberry the size of a sugar pie pumpkin. Raw, the slices are a bit awkward to deal with (think of a soft watermelon). My recommendation is to remove the thin skin, mash the abundant pulp, and simmer the pulp with a three tablespoons of tapioca and 1-1/2 cups of water. Stir frequently, simmering for about 10-15 minutes until thickened.

from the kitchen of K. G. Anderson

I’ve never seen an ocean, but I grew up playing “Rowboat” in my family’s cramped living module on level C of Xinxin Colony. The worn blue carpet was the water, the concrete floor beyond it, a sandy shore. With a broomstick as an oar, I pretended I was Gramma Jen, rowing hard against the tide to get us home. “They’d restricted travel by then, but Gramma Jen wanted us to know about beaches and the …

Q: What kind of non-fiction do you like to read and how does it affect the fiction you write?

A: My nonfiction reading is mostly autobiography and biography. I’m interested in the ways that people shape their life stories, and how and why they tell them — to themselves and to others. In my fiction, I like to explore trickster characters for whom lying is an art form; characters who delude themselves (often for self-preservation); and people who create stories of the future that serve as roadmaps, often for the organizations they lead. Many of my stories, including “Rowboat”, involve family secrets. I was deeply influenced by Russell Baker’s Pulitzer Prize-winning autobiography Growing Up. Baker’s stories about the Depression era helped me understand my parents and grandparents, who didn’t want to talk about those hard times. As the child of a Jewish parent, I was fascinated by Art Spiegelman’s ground-breaking graphic novel Maus: A Survivor’s Tale.

K.G. Anderson is a Seattle-based journalist, arts reviewer, humor columnist, and technology writer. She worked on the launch of Apple’s iTunes Music Store, wrote a book about the iPhone, and served as president of the board of Northwest Folklife. She shares a house full of books and cats with bookseller Tom Whitmore and lives for the warm summer months and gardening. 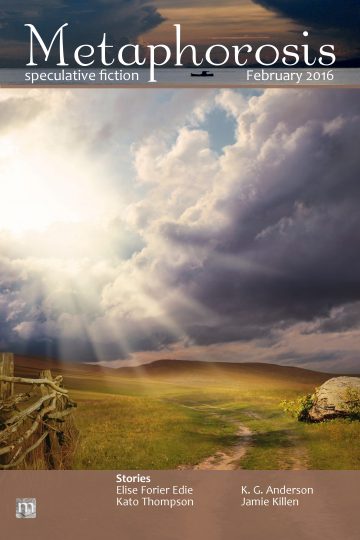