Lisa Short’s story “Genesis” was published in Metaphorosis on Friday, 15 October 2021. The crosstrainer (as opposed to the stationary bike or treadmill) has always been my cardio gym equipment of choice, and one day, as I was on it, I was thinking about cross-country skiing (which the crosstrainer somewhat mimics)—for whatever reason, I started imagining a woman, inside a vehicle that operated similarly to that, alone and traversing an icy plain at night. On …

Anne awoke to a crawling itch behind her ear.

Q: What work of art has been the most inspiring for you?

A: No one particular work of art, but when I was eight years old, my mother and I moved in with the man who would become my stepfather a year or so later. His closets were a treasure trove of comic books and speculative fiction paperbacks (which was definitely a huge influence on me as a writer!) but the thing that first caught my eye about his house were the posters he had taped up all over the walls. Prints by Frazetta, Vallejo and more were plastered over every square inch, depicting mighty warriors, monstrous beasts, spaceships with guns blazing… I was enchanted, and whenever I had trouble falling asleep right away at night, I would think of one of those prints and a story about it. Who were they? What were they fighting for? What alien or fantasy world had they sprung from? Many of the stories I still write today took their earliest inspiration from some of those prints.

Lisa Short is a Texas-born, Kansas-bred writer of fantasy, science fiction and horror. She has an honorable discharge from the United States Army, a degree in chemical engineering and twenty years’ experience as a professional engineer. Lisa currently lives in Maryland with her husband, two youngest children, father-in-law and cats. She is a member of the Horror Writers Association and a Futurescapes 2021 alumnus. 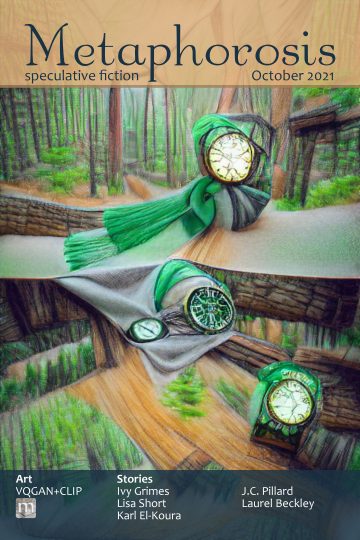 All the stories from the month, plus author biographies, interviews, and story origins.

Lisa Short’s story “The Season of Withering” was published in Metaphorosis on Friday, 18 October 2019. I have the (probably peculiar) lifelong habit of making up bedtime stories and telling them to myself when I’m having trouble getting to sleep at night. A lot of the stories I end up writing have this exercise as their inspirational mechanism, and this particular one definitely originated as a “bedtime story.” I didn’t get much past the opening …