T. B. McKenzie’s story “BetaU” was published in Metaphorosis on Friday, 7 July 2017. “BetaU” is my reflection both on the fast approaching possibility of programmable brains, and also on the way the real world can condition us to conform. Having worked in education for over a decade, I’ve seen the most enthusiastic young teachers burned up by bureaucracy, becoming the mindless middle managers they once so despised. “BetaU” imagines a future where that process …

On Sunday, Janie’s com pinged with a message from her cousin who worked for Visage, one of the big city body-mod firms. You should go for this! read the underlined text, which took her to a minimalist page with the company name, BetaU in the middle and a single link at the bottom: Employment Opportunities. Only the fanciest places hired humans any more, and Janie’s curiosity sparked, if not her hope, for they’d only want …

Q: Where do you write?

A: Short answer; any table I can.

Expanded answer: I write in the margins of the day; the parent waiting table at my son’s martial art class; the staff table at lunch when I should be marking essays; the desk in the spare room at my parents’ house when the kids are playing with their presents; and the kitchen table when all else fails. I dream of a house with a wizard’s tower accessible by a creaky ladder with enough room at the top for a little desk and a kettle.

The gateway drug was Narnia, but pretty soon T.B McKenzie had moved on to stronger stuff. Lloyd Alexander, Ursula Le-Guin and Terry Pratchett solidified the addiction, and then along came the category one names like Jack Vance, Asimov and Iain M. Banks.

After that, there was no hope, and the only way to control the habit was for T.B to pick up a pen and start manufacturing.

His turf is Melbourne, his cover is teaching high school English, and he lives in constant fear that his family will discover his illicit after hour life that is fast spiralling out of control. 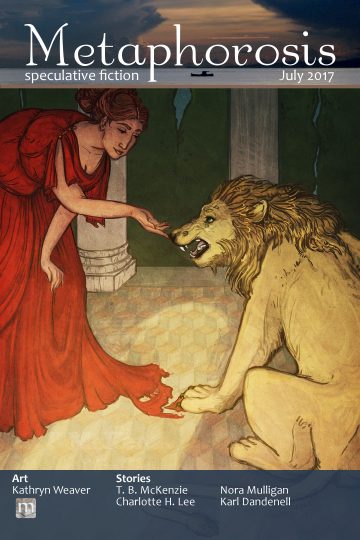