Tris Matthews’s story “When the Last Friend is Gone” was published in Metaphorosis on Friday, 16 November 2018. I did cognitive science at university and became fascinated with what consciousness and cognition are, how they emerge in animals, how we will achieve this in robots, and the possibilities this will open, such as the solution to currently unimaginable questions and the shift to a hive mind society with utterly different desires and goals. Along the …

Butler found Pebbles dead in the morning. Each day, the moment Butler became active at 6 a.m. sharp, the little old dog’s stumpy legs would carry her over to seat herself royally in front of the enormous and rusty Cadillac-themed refrigerator to watch. Butler would ruffle the flops and folds of skin on the top of her head before serving up her breakfast and then turning to other chores. Today, Pebbles didn’t come. Butler washed …

A: Poetry. I keep trying, and I’m not too bad at short, limericky things, but I’d love to write an epic (perhaps semi-epic) poem in a quite archaic style to tell a modern or futuristic story… Alas, my few attempts to date have ended quickly, as I slip into a very nursery rhyme like style.

Tris Matthews’s story “When the Last Friend is Gone” was
published on Friday, 16 November 2018.
Subscribe to our e-mail updates so you’ll know when new stories go live.

Tris Matthews lives in London with two ladies, one of whom is a beast. By day, he works in science fact publishing, while by night, or at least late evening, he masquerades as a science fiction writer, among other things. Upon arriving in London, he accidentally became an EFL English teacher, which sowed the seed and nurtured the tree of a love for language, particularly the pernickety bits. Now is nearing the end of his first year of ‘serious’ writing, in which he set the goal of writing one story in every genre—and failed.

Tris Matthews’s story “When the Last Friend is Gone” was
published on Friday, 16 November 2018.
Subscribe to our e-mail updates so you’ll know when new stories go live. 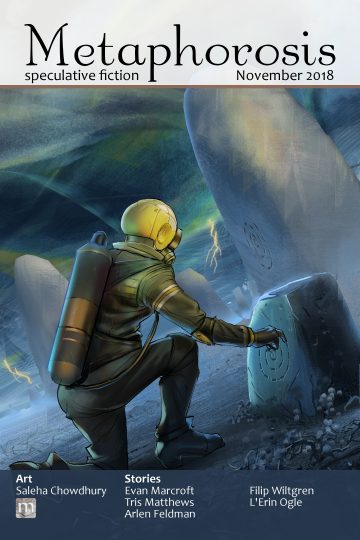